We have some Blu-ray discs and I was looking for a ripper that will fully functionally copy my personal Blu-ray discs including my copy-protected movies mostly from Disney for kids I want to protect with a copy on HDD that I can put them on a single portable disk that we could either take with us when we travel or hook up to our router and watch from TVs. I also prefer watching my Blu-ray videos on my iPad with kids and sometimes on my iPhone myself. My grungy kids sometimes screw up my Blu-ray and DVDs & I want a real usable copy so I have those covered… I found MP4 to be the most compatible video for PC, MAC, iOS, as well as Android devices. So, I’d always like to rip Blu-ray to MP4, and it’s compatible with the new iPad and the new Apple TV so that we can watch it whenever they like.

I have an easy solution for ripping Blu-ray, either standard 1080P or 4K UHD Blu-ray, to MP4 or iPhone/iPad, new Apple TV, no matter what operating systems you are running, like Windows 10, macOS Catalina, or Big Sur. Also, you will have two gifts about how to burn MP4 back to Blu-ray or DVD discs and how to play the ripped MP4 files free. Here we go.

The MP4 file, with the file extension .mp4, is one of the most commonly used container formats to store video, audio, and subtitles.  MP4 was based on QuickTime, the MOV format, initially MPEG-4 Part 12. And the current version is MPEG-4 Part 14. Attached, you see the history version of MP4:

MP4 comes with quite some advantages, among which leads you to rip and backup Blu-ray or DVDs to it.

First of all, due to the less loss of quality with a higher degree of compression, MP4 is one of the best formats for video streaming, meaning that you can rip your Blu-ray to MP4 with much less space, especially MP4 H.265. So, it’s ideal for people to rip 4K UHD Bluray to MP4 H.265(HEVC) to save space while keeping the best quality. However, it’s all up to you. 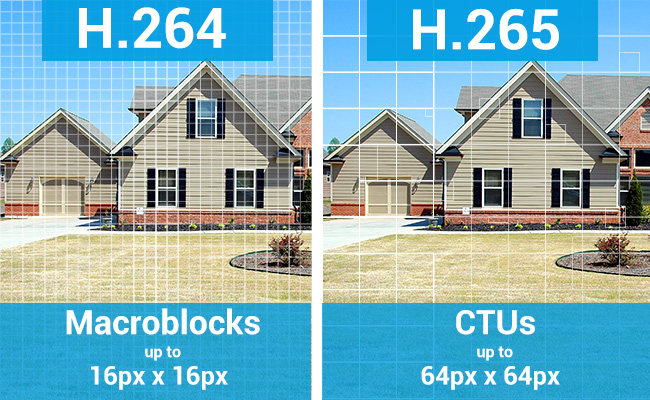 Secondly, because of all the advantages and benefits, MP4 becomes one of the most popular video formats and the most compatible with Windows, macOS, iOS, Android. And it can run on almost on devices. Therefore, it can be your top choice to rip Blu-ray to MP4 as you don’t have to rip your Blu-ray twice for your devices. It’s cross-platform.

Besides, MP4 supports metadata and 3D playback. So, if you like, you can even convert 2D Blu-ray to 3D MP4 for entertainment.

You can visit the MP4 file format uses, features, advantages, and disadvantages for more details.

Life is tough and we’d always like to rip Blu-rays with ease. There are a great many free ripping solutions like Handbrake and MakeMKV but neither of them is a perfect ripper for Blu-ray discs, especially the encrypted ones from Disney, Paramount, Pixar, etc. Handbrake does not support encrypted Blu-ray at all. MakeMKV rips two titles for me but MKV is not my choice for Apple TV, nor iPad/iPhone. I just want MP4 for Blu-ray discs.

Why MakeMKV is Not My Choice?

Some of the paid Blu-ray to MP4 rippers do not satisfy me either. Some failed to load a Blu-ray. Actually, they do not support Blu-ray at all.  Some rip the Blu-ray but the output is out of sync. I also tried the PC version and Mac version from another company, but when I am trying to rip Blu-ray to MP4 and it picks title 1 automatically. However, after converting, the video seems to be a small segment that is repeated over and over again.

Leawo Blu-ray Ripper is an ideal solution for ripping Blu-ray discs to any video format you want including basic video formats MP4, AVI, MOV, and WMV and various phones, tablets, and TVs. HD videos like MTS/M2TS, MKV is also no problem. While ripping Blu-ray to MP4, feel free to select H.264 or H.265 as you prefer.

With a powerful coding and encoding tech in, it rips Disney as well as Pixar-protected Blu-ray discs with ease.

You can have a trial of Leawo Blu-ray Ripper through the above buttons, and please note what you download will be Leawo Prof. Media, and the Blu-ray/DVD Ripper is one of its functional modules. From my tests, Leawo is one of the best Blu-ray rippers in the world and is fully compatible with the latest OS from Microsoft and Apple. What’s more, it supports DVDs.

Ripping Blu-ray or DVDs with Leawo is omnipotent and it is so easy to find your expected profiles, like MP4 to me, because it’s the default one. If not, you are always free to create one yourself. Ripping protected Blu-ray is as easy as ripping other homemade or non-encrypted ones with this Blu-ray to MP4 Ripper. I am gonna show you how to use Leawo Blu-ray Ripper to rip Blu-ray to MP4. Although the screenshots are taken on Windows, this guide applies to both Windows and macOS.

Step 1. Insert your Blu-ray into your computer’s Blu-ray drive. Download Leawo Blu-ray Ripper from the above buttons, install, and launch it.

Step 2. Choose Blu-ray Ripper or UHD Ripper in the main interface or click the Convert tap on top. 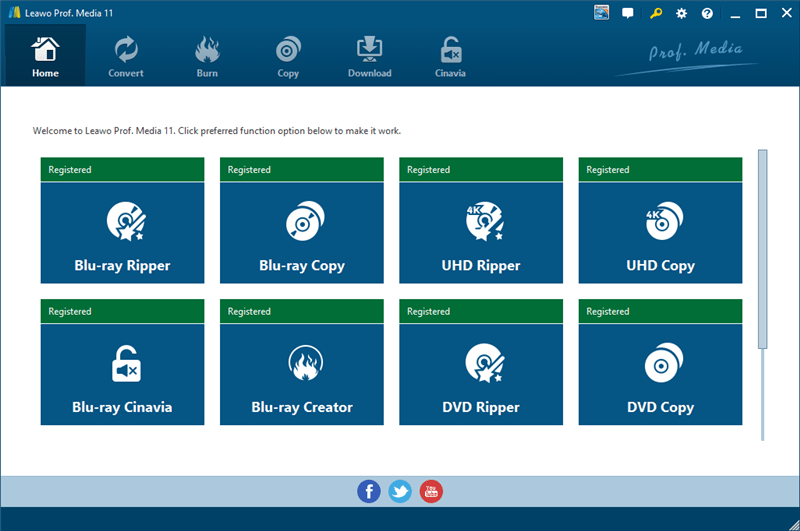 Step 3. Click the Add Blu-ray/DVD button and select the Blu-ray disc in “Add from CD-ROM”. If there is one more drive, make sure you select the right disc that lists for you. The program will start analyzing, which usually only takes seconds.

Step 4. After loading, you will see the program has already selected the right title for you. But you need to confirm the Main or Full or Custom movie of any Blu-ray before ripping. Generally, I recommend only the main mode for movie Blu-rays, and custom mode for TV shows. Don’t go for Full Movie for Blu-ray, especially those 4K ones, they are HUGE. 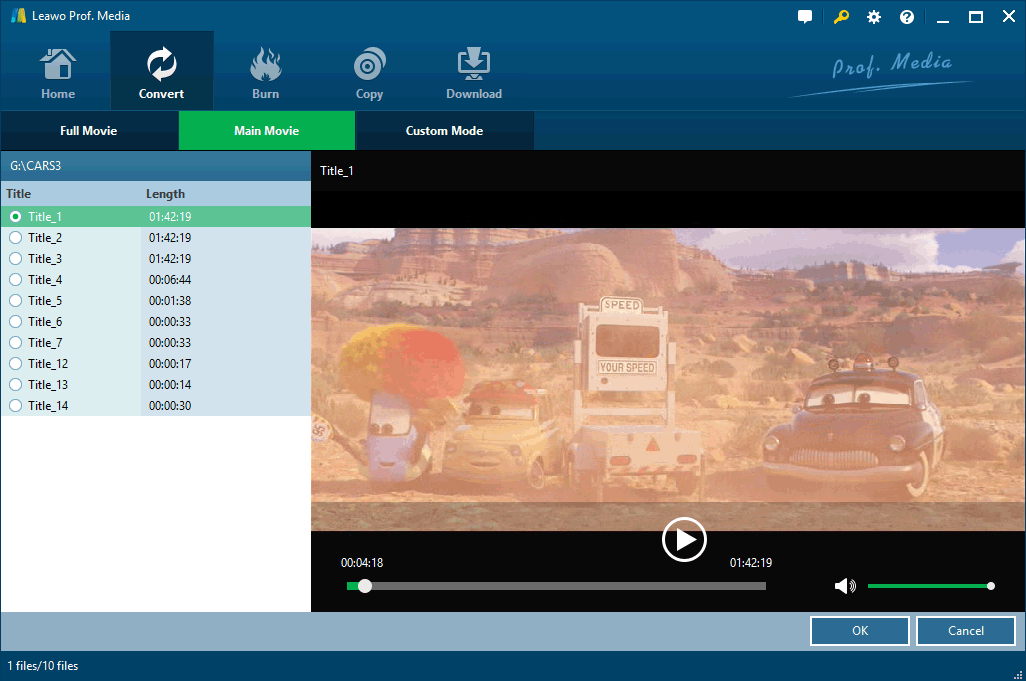 Step 5. After the Blu-ray is loaded, the most recently used profile is selected for the output. If this is the first time you use Leawo, MP4 Video comes as the default. Here, you will see the basic Blu-ray info here including duration, resolution, output file format, and estimated file size.

[Optional]Step 6. Change/Edit/Custom profiles. If you need to rip Blu-ray to some other formats or devices except MP4, like Apple TV. Go Select MP4 Video-Change and target Apple TV in Device-Apple. You are also available to custom the profile and save it as your own. Say you can specify the Bit Rate instead of the default Smart Match. However, as far as I can see, the MP4 video is compatible with most devices. For Apple devices, it is important to set the MP4 codec to H.264 for Blu-ray or DVD ripping instead of MPEG4. For 4K Blu-ray ripping, I recommend H.265/HEVC, but it depends. H.264 is also great and more compatible.

Step 7. You are ready to run the ripping of your Blu-ray disc. Just click the Convert button to do so and enjoy the perfect MP4 copy on Windows/Mac or Apple TV or anywhere you want for playback. 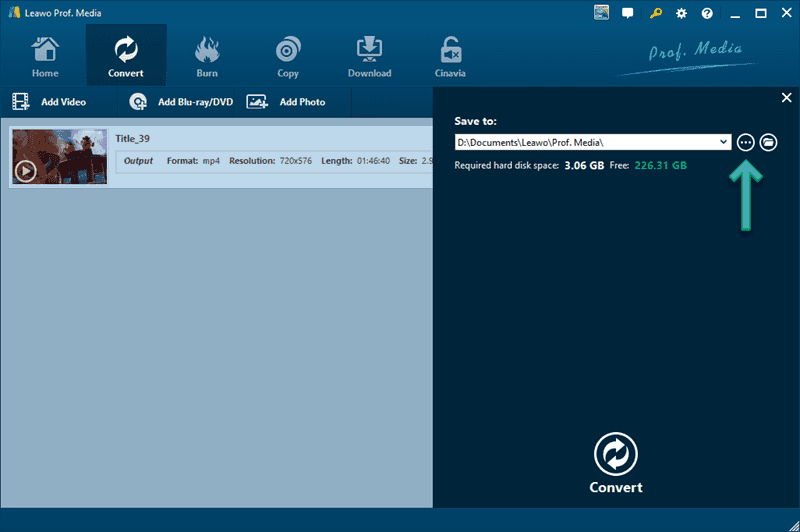 The subtitle for Blu-ray ripping is disabled by default. If you like a subtitle or add one for your own, click the drop-down menu from the Subtitle option to select the one you need. However, please note that the forced subtitle is always enabled by default.

Edit is quite powerful in Leawo. It allows you to trim, flip, rotate, take screenshots as well as crop. Do as you like. If you enable 3D, you are also possible to watch 3D Blu-ray on your VR headsets. 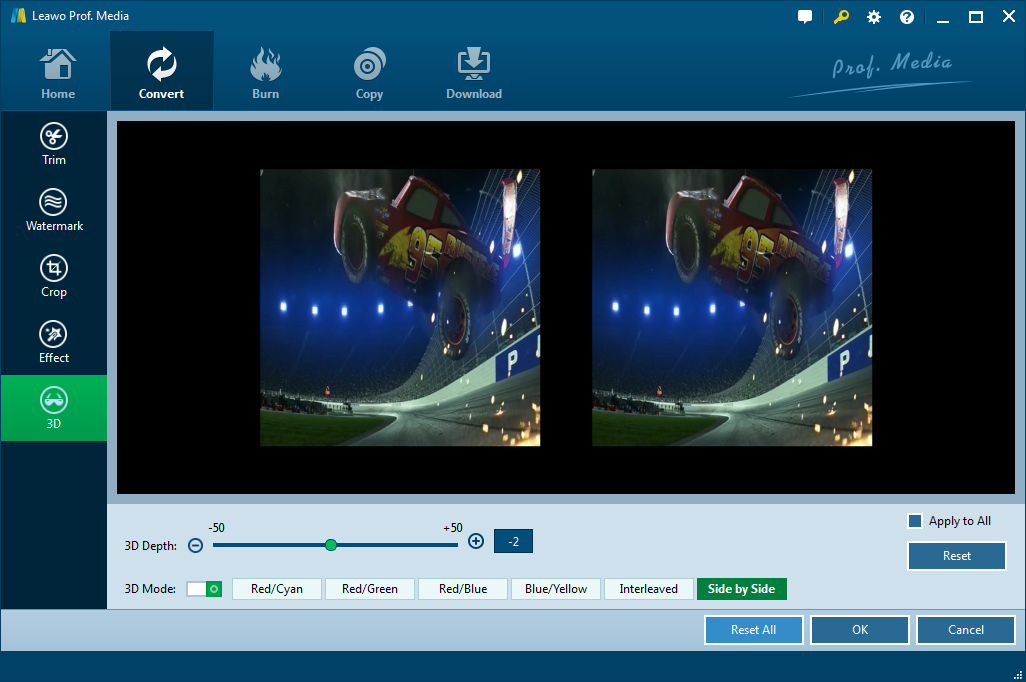 For Blu-ray ripping with Leawo, I highly recommend you allow the program for internet connection. This is because Leawo updates itself and gets the Blu-ray key from its server to better support protected Blu-ray and DVDs. 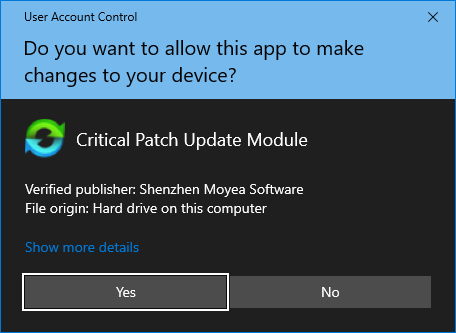 One more thing that is important for MAC users. If you plan to rip Blu-ray to MP4 on Catalina or Big Sur, or even the Apple Silicon Macs, you need to be attentive and pay close attention to the tips here.

After ripping Blu-ray to MP4, you may want to transfer the video to the iPhone or iPad for offline watching. iTunes is the initial way to do so, and it is free. However, to me, it is not much user-friendly. And, there’s an alternative from Leawo: Leawo iTranfer.

As you can see, the UI is clean and straightforward. And, you can transfer the Blu-ray MP4 video to iPhone or iPad via the Add button as shown in the screenshot: 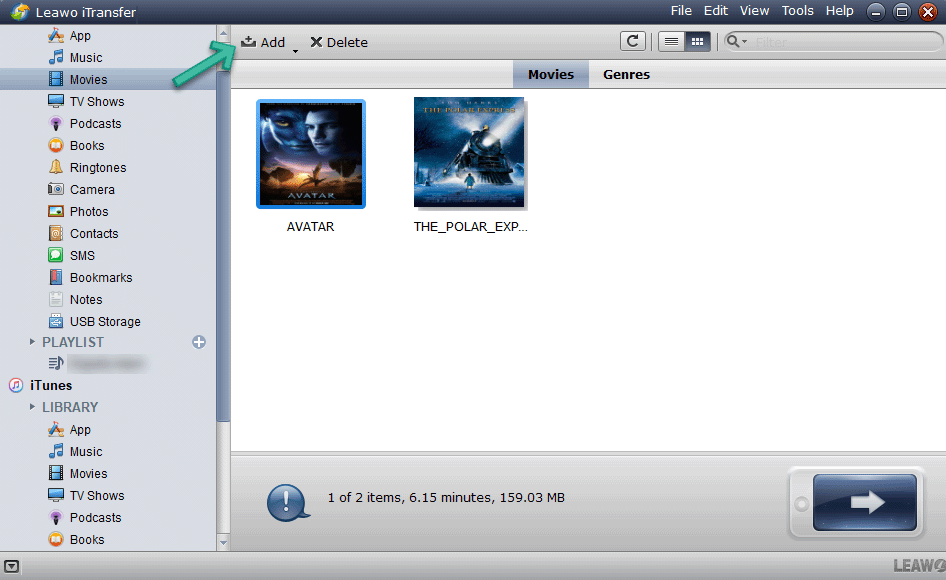 Leawo offers a one-stop solution for Bluray/DVD ripping, copying, and burning and combines its solution into one program called Leawo Prof. Media and the DVD ripper, Bluray Ripper, DVD copier, Bluray copier, etc are part of the whole solution.

So, things are much simple if you want to burn the MP4 files back to Bluray or DVD.  BD50 and BD25 are supported. Simply go for the Blu-ray/DVD Creator module. 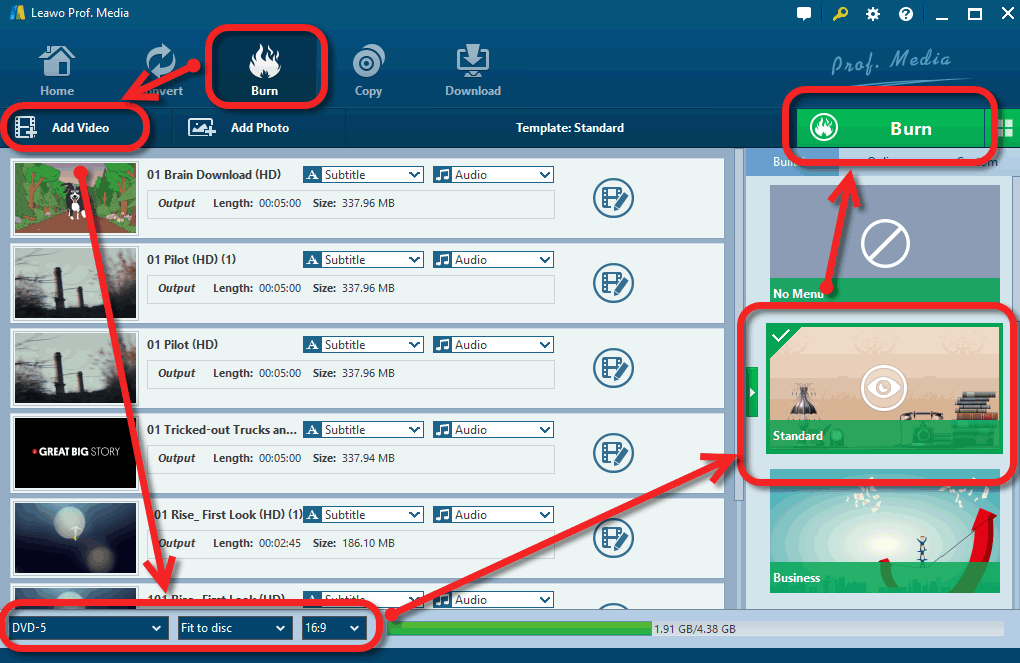 Bonus Gift: How to Play Blu-ray MP4 file on PC and MAC

Playing Blu-ray MP4 video is always free and easy with VLC Media Player for PC and Mac, or MPC-BE for Windows, or IINA for MAC.