Update: It’s really sad to update my AnyMP4 Blu-ray Ripper review on November 18th, 2020. This is because AnyMP4 Blu-ray Ripper no longer supports copy-protected Blu-ray discs and you will get the below error message that shows: “Analysis failed. For legal reasons, copyright protected discs cannot be loaded for now.”

And, I’d like to recommend DVDFab Blu-ray Ripper or Leawo Blu-ray Ripper as alternatives. They support protected Blu-ray discs and work almost the same as AnyMP4.

Below you will see my original review for AnyMP4 Blu-ray Ripper:

Just writing to say here how impressed I am with the AnyMP4 Blu-ray Ripper. There are not too many Blu-ray rippers as DVD rippers since Blu-ray discs are far more difficult to decrypt. With almost 50GB in size and 1920×1080 in resolution, ripping Blu-rays are always way too slow than ripping DVDs. I chose the AnyMP4 program above the competition for many reasons in the protection of my Blu-ray library. As a father of a little naughty kid and careless wife, the life of Blu-rays is soon shortened, so I let them play the copies and protect my originals.

There is no one feature in the AnyMP4 Blu-ray program I would single out as being a ‘best feature’ as it the collective features that combine to give the customer an outstanding program that has become the benchmark that others must strive to reach and I believe AnyMP4 will do, what they have done to date in their next version, they will assess technological advances, design and write winning software and meet the needs of the customers who provide them with an income… why would they change a winning strategy, happy customers come back.

Below is my review for AnyMP4 Blu-ray Ripper and the review is mainly done on Mac but I also tried the Windows version, which works as well as the Mac version. I suggest you guys have a try via the below buttons and it won’t let you down.

Top/Bottom is also available in Split Screen. Normally, AnyMP4 recommends the Left/right format but both can be used in 3D devices like 3D TVs and VR headsets and user watching with special 3D glasses. Anaglyph can be displayed on any screen with 3D glasses but is the worst one, thus it is not recommended.

I’d like to re-encode my Blu-ray library to x265 (HEVC), although I don’t have many. I know H.264 is good, however, I also want to use the higher efficiency of the video codec while keeping audio (if there is not also a better solution) the same. HEVC/H.265 is said to be the royalty-encumbered, standards-based successor to H.264 and is able to reduce original h264 to 36% bitstream, which should keep the quality the same but reduces the size. AnyMP4 offers H.265 for normal MP4, and 4K MP4, and 3D MP4. Just click on the output to choose the one you prefer. Or do a quick search from its search box. Other 4K videos are also available for ripping Blu-ray discs as you can see below including 4K MP4 H264, 4K MKV, 4K AVI, 4K WEBM, 4K FLV, and 4K AVI. 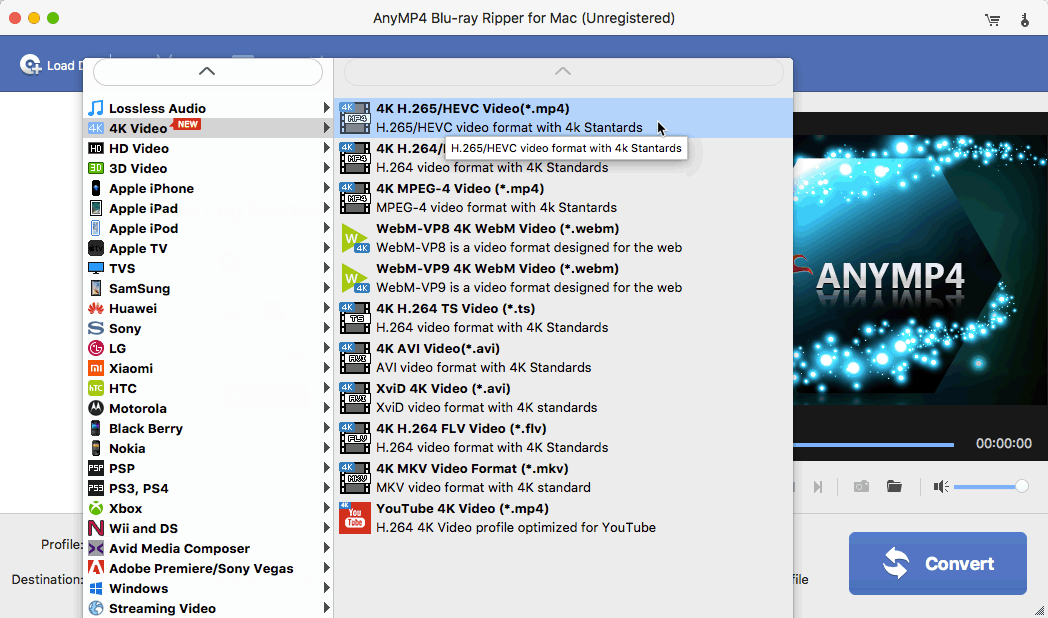 When there are up to 5.1 sound in DVDs, Blu-ray discs contain 7.1 sound, I’d like to keep the audio the same while watching them on Apple TV, the latest model. And, AnyMP4 Blu-ray Ripper is able to rip Blu-ray discs with Dolby Digital Pass-through 5.1 or 7.1 sound. 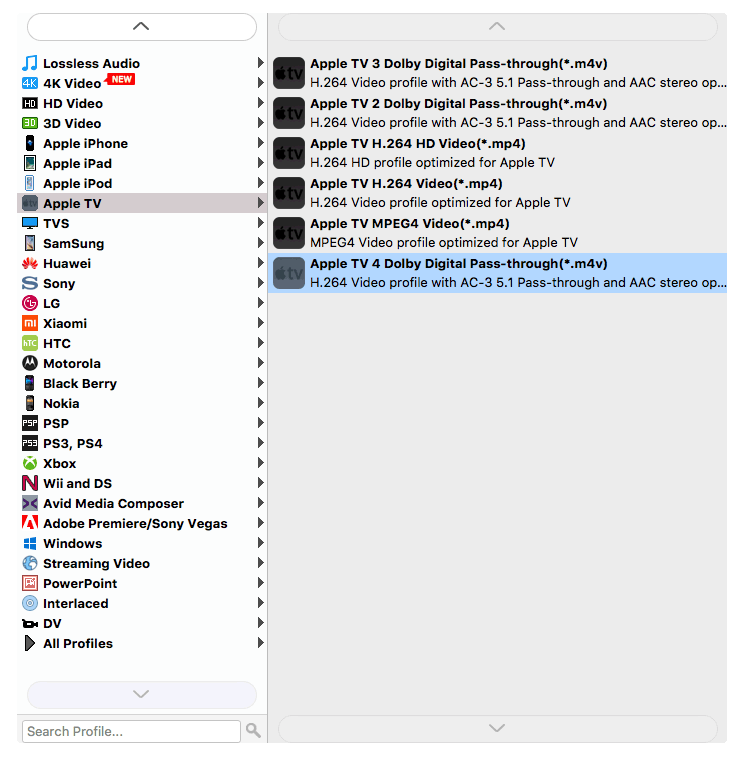 Although it only says 5.1 sound, you are able to set it to 7.1 as shown below. Please note 2 channels come by default and make sure your Blu-ray has 8 channels if you want a 7.1 pass-through for your Apple TV. 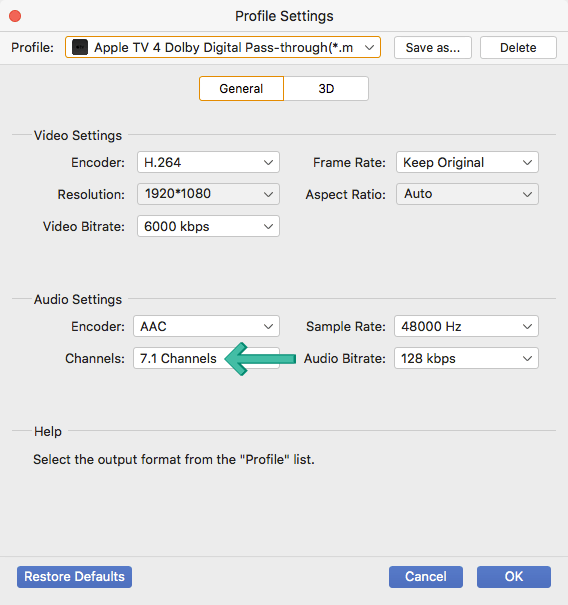 Besides, if you find the sound is a bit low on Apple TV, you are able to increase Blu-ray sound volume by up to 200% with AnyMP4 Blu-ray Ripper.

While ripping DVDs with AnyMP4 DVD Ripper, I put films I have bought as DVDs in a suitable format on my iPad or iTunes to stream to Apple TV. I used AnyMP4 where I could copy all the audio tracks I wanted-sometimes I am in the mood to watch a film in English, sometimes in Polish, and I could switch language during watching. I made the copies without any compunction as I had correctly paid for the DVDs and did not give the copies to other people.

With other programs, either DVD rippers or Blu-ray rippers, I found they let me down in one or more ways, invariably not delivering what they suggested they could. But when it comes to MakeMKV and AnyDVD HD, they do great jobs. What will you choose for a Blu-ray ripper between MakeMKV, AnyDVD HD, and AnyMP4 Blu-ray Ripper?

MakeMKV does really a good job for me for DVDs, and it is now upgraded to support for latest versions of AACS and BD+, for now, it’s AACS v65. You are able to get a beta key for MakeMKV here. If you are interested in the full version, you can get a lifetime key here.

However, AnyMP4 is able to do all MakeMKV can do for creating multiple audio and subtitle tracks in MKV, and AnyMP4 is able to split chapters! If MKV is the only choice, both MakeMKV and AnyMP4 Blu-ray Ripper won’t let you down. If not, you will probably have to rip Blu-rays twice to get a needed format, this will take much longer for the second conversion even though ripping Blu-ray discs to MKV is fast with MakeMKV.

Besides, does MakeMKV support 3D MKV output for your 3D devices? It doesn’t, but this is what AnyMP4 is good at.

AnyDVD HD is quite limited as well. But it does fulfill a lot of customers’ needs: to decrypt and then free watch any Blu-rays. It even allows you to playback 3D Blu-rays on a 2D display. And if this is your only need, that is fine.

AnyMP4 Blu-ray Ripper does work the same as AnyDVD HD, so it seems to be a little off-topic to compare the two programs but some users may be puzzled by what they can do. If you need a Blu-ray decrypting and ripping solution to rip any Blu-ray discs to video formats, H.265, MKV, 4K MP4, 4K MKV, AVI, WMV, to name but a few, pick AnyMP4 Blu-ray Ripper.

One more thing, AnyDVD HD only works on Windows, while AnyMP4 works on both macOS and Windows 10.

I say again, there is no one feature that sells the Blu-ray ripping program, it is the collective features that deliver a knock-out program that smoothly leads (and guides if necessary) the user to obtain a quality copy of their Blu-ray and repurpose for use in numerous formats. Interface, output quality, speed, decryption, the ability to resolve and combine these solutions with outstanding aftercare have collectively ensured that AnyMP4 Blu-ray Ripper is the best and only choice.

Also, particularly in my case, I have found AnyMP4’s able to provide outstanding aftercare support – without great customer service…it doesn’t matter how good the product is, without it, you won’t grow.

So, I want to say Thank you so much to Mary from AnyMP4. Great job, great product!

How do you get the program to read/decrypt copy protected discs? Whenever I insert one, I get a message that says “Analysis failed. For legal reasons, copyright protected discs cannot be loaded for now.”

Is the program allowed for an Internet connection?

Yes, it has an internet connection. I’ve attached a photo of the error message. 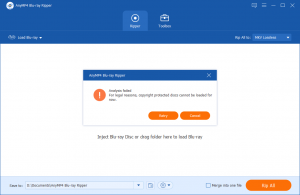 Hi Chris,
Sorry for the late concern. I have been contacting AnyMP4 and confirmed that they no longer support copy-protected Blu-ray.
I’d like to recommend DVDFab Blu-ray Ripper or Leawo Blu-ray Ripper as alternatives.
Hunk